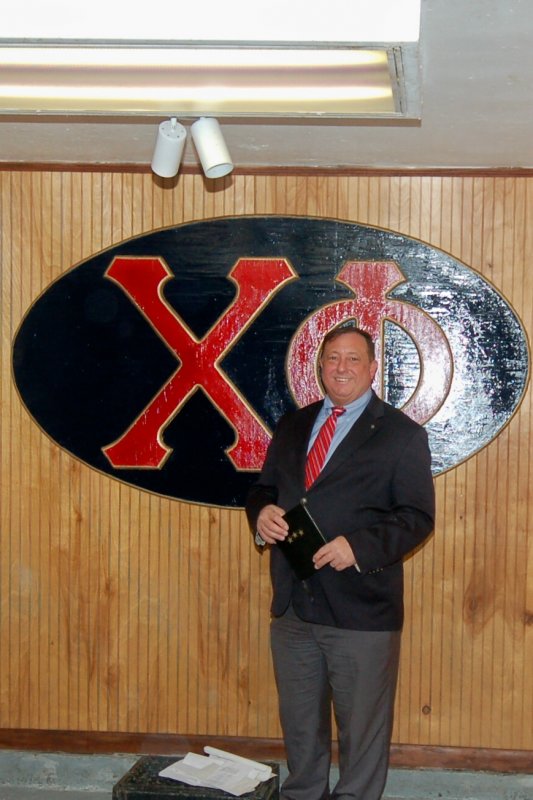 As Grand Alpha, Rocco Henry Carnevale, Mu 1980, made it clear to anyone who would ask and in every action he took his first priority was to serve the Brothers of the Chi Phi Fraternity.

Thanks to an extraordinarily generous gesture, Carnevale’s service and name will live on for generations as a result of the $110,000 gift he’s made to support his beloved Mu Chapter and endow what will become known as the Rocco Henry Carnevale Scholarship.

To accomplish his objectives, Carnevale named the Chi Phi Educational Trust as a beneficiary of his 403(b) plan for $100,000.  Naming a nonprofit organization like the Educational Trust as the beneficiary of a 403(b) or 401(k) plan is a method of planned giving without involving the estate or estate taxes. In this case, it provides a permanent endowment to provide perpetual support to an institution Carnevale cherishes.

In addition, Carnevale becomes one of the most recent alumni to make a five-year commitment and join the prestigious Gladfelter Circle recognizing those alumni contributing $2,000 in one year, with $10,000 going to the Mu Chapter Excellence Fund.  “I am pleased to support the Brothers in this way, and I encourage other alumni to come off the sidelines and be recognized as part of the legacy of our first ever capital campaign.”

“A monthly deduction from your bank account or credit card is a great way of becoming a Gladfelter Circle member.  Any amount will make a big difference, especially over time, to Chi Phi” explained Carnevale.  “At the end of the day, it’s all about leadership and setting the example of giving back to the institutions that made us who we are today.”

“When I started college in 1976, I found a stable and nurturing environment at Chi Phi. It’s my hope that our tradition of serving and giving will be passed along well into the future to all the Brothers.”

Carnevale’s service to Chi Phi began as a young man on the campus of the Stevens Institute of Technology located across the Hudson River from New York City in Hoboken, New Jersey. As an undergraduate, Carnevale held several chapter offices, including Beta, Delta, Recruitment Chairman and Steward while earning his Bachelor of Engineering degree in Mechanical Engineering in 1980.  During that time he also became a certified Engineer-in-Training and a member of ASME and ASHRAE.

Soon after graduating with his engineering degree in hand, Carnevale began his professional career working for a large multi-national architect engineering company designing and building nuclear and fossil fueled electric generating stations around the United States.  In 1986 he achieved his professional engineering license and currently serves as a Project Manager / Systems Engineer at the Princeton University Plasma Physics Laboratory advancing technologies associated with thermonuclear fusion and energy development for over twenty five years.

As his career took off, he continued to remain connected to Chi Phi. He has served as president of the Mu Alumni Association for twenty five years after serving as secretary for three years. He is proud of the fact that the Mu Chapter house – affectionately known as the ‘Green Gate’ – is one of the few fraternity houses at Stevens that is not owned by the University.  Thanks to the hard work and dedication of many Mu Brothers, Chi Phi continues to chart its own destiny and manage a sizable asset for the benefit of future generations.

His involvement with the national fraternity began in 1988, when he attended the College of Excellence as an Alumnus participant. His interest in serving the broader Chi Phi brotherhood increased with his exposure to programs such as COE and RLA as well as Chi Phi Clubs and Meet and Greets across the country.

“Attending COE as an observer really helped me learn the ropes as a young Alumni President and gave me an opportunity to meet with my peers from other chapters,” Carnevale reminisces.

In 1998, he attended his first Congress as a voting Alumni Delegate in Atlanta. Carnevale has attended every one since the 2000 Congress in Chicago.

“I learned that sitting at the table is better than being in the room, and if you are not in the room, you are in big trouble.”

Carnevale considers alumni involvement with the host Universities and the National Organization essential to the health and wellbeing of the local Chapter.

Carnevale was elected to the Board of Governors of the Educational Trust at the 2002 Congress in San Francisco serving two terms during the Ron Frank administration.  In addition, he served on the COE Dean’s Team from 2002 - 2008 and as a group facilitator. He was Alpha of Congress at the New York City Congress in 2003, and served as Chairman of the Executive Director Search Committee that hired Michael Azarian, Psi Delta 1997, in 2004.

Grand Alpha Richard Lane, Kappa Zeta 1993, invited Carnevale to serve on the Grand Council in 2004 as the Heritage & Traditions Counselor. Between his service to COE and on the Grand Council, Carnevale earned a reputation as a great communicator, among students and alumni. He was elected Grand Alpha-Elect in 2006 and took over as Grand Alpha at the 142nd Chi Phi Congress in Las Vegas, Nevada in 2007, serving the National Fraternity until the Denver, Colorado Congress in 2009.

In 2013, Carnevale began serving the National Fraternity as a member of the Grand Alpha-Elect Search Committee and the Educational Trust as a member of the newly established Trust Advisory Committee.  He spent much of his time as Grand Alpha visiting the local Chapters and as many undergraduates and alumni as possible. He continues to visit Chapters and Brothers on his travels and was awarded the Chi Phi Distinguished Service Award at the Baltimore Harbor Congress in 2012. He received the Stevens Alumni Award in 2014.

Endowing scholarships is a way to continue his service to and support of Brothers far into the future.

“I see my involvement as an investment in advancing a highly worthy endeavor and helping the Brothers to develop professionally and socially in a pluralistic society,” said Carnevale. “Fundamentally, we are all links of a chain, and it is our responsibility to maintain the strength and integrity of our Fraternity.”