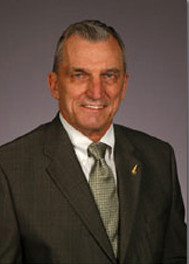 The massive crowd assembled at the 146th Chi Phi Congress jumped to their feet in thunderous applause upon learning that Al Warrington, IV, Theta Delta 1958, Nu Delta 1979, was making a $1.6 million gift in support of the Changing Lives Campaign. It is the second largest gift in Chi Phi history.

Warrington, a long-time benefactor for the Fraternity, credits Chi Phi as one of the single most important factors that contributed to his success in life.

He enjoyed a successful career as the former American managing partner for Arthur Andersen.  After he retired, he co-founded or was otherwise involved with the success of several companies including Atlanta-based House of Cheatham, Inc., Houston Plating and Coatings and Gulf Coast Mechanical.  He also co-founded Sanfill, Inc., an environmental company based in Houston, Texas, which developed and operated nonhazardous solid waste landfills and land farms.  Sanfill later combined with others to form the Waste Management, Inc.

An avid Florida Gator, he’s remained involved with the University of Florida since he graduated with a Bachelor’s Degree in Business Administration in 1958.

In 1979, he was named a UF Distinguished Alumnus, and in 1985, he was named an Outstanding Alumnus by the UF Fisher School of Accounting (which he was instrumental in creating).  In 1996, he established an endowment for the UF College of Business which now bears his name.  He has served on the University of Florida Board of Trustees since its inception in 2001, and he chaired the Warrington College of Business’ Capital Campaign that raised more than $60 million for the College.  His service to the University of Florida also includes terms as president of both the UF National Alumni Association and the Gator Boosters.  In 2003, UF inducted him into its Athletic Hall of Fame for his extensive support of Gator athletics.